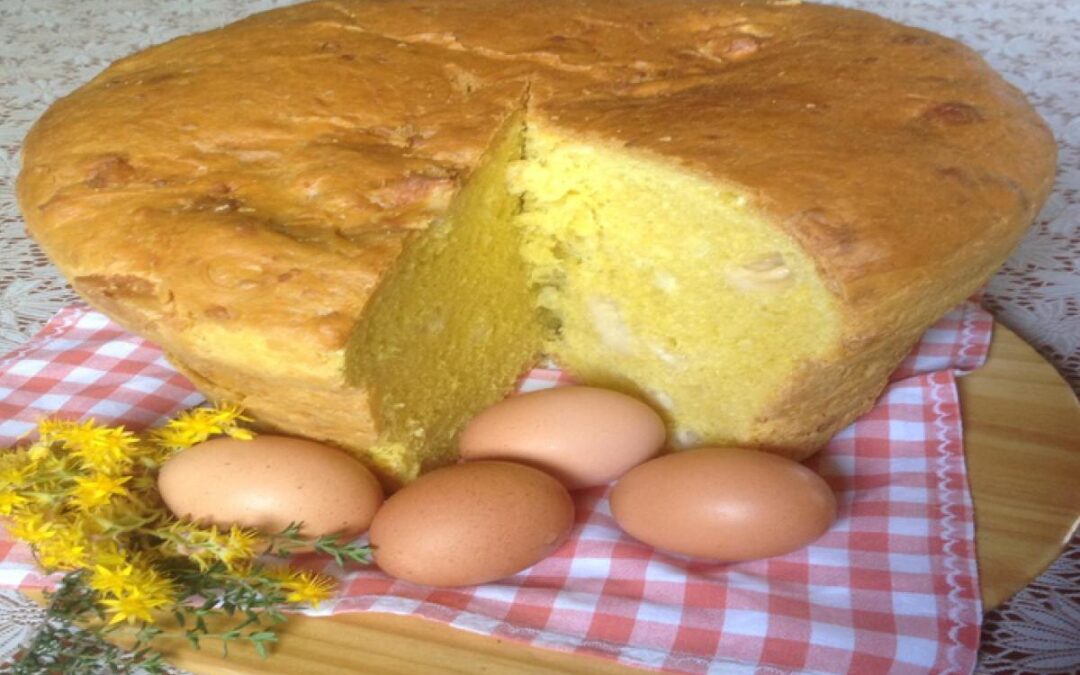 Easter is a religious festivity celebrated in Umbria and in other Italian regions with many cultural traditions and typical plates. These dishes take origin from the religious meaning of the celebration such as the eating of lamb and eggs and others that have taken origin from the popular tradition: the chocolate eggs, some typical cakes and most important the Torta Pasquale (“Easter cheese pie”). It is also important to remember that inside the same region the traditions can have small variations.

The Easter cheese pie is a salty pie made with eggs and mixed cheeses. Once it was served for breakfast during the Easter Sunday, so people ate it with salami and “capocollo” (typical sliced pork meat), accompanied by a glass of good Umbrian wine. Nowadays many Italian families serve it as an appetizer during the Easter lunch.

Once this it was prepared 3-4 days before Easter. It was a long and demanding job. The mixture went through a long leavening and baking in wood-fired oven. With the mixture that remained were prepared small pies for children such as male and female rag dolls.

Nowadays you can find it in the bakeries for almost all the year, because usually it is used to prepare different appetizers or snacks.

Easter is the religious feast that marks the beginning of the spring, in our houses we can smell the first spring flowers (narcissuses, tulips), the fruit trees bloom and the houses are prepared for welcoming the Easter benediction, a tradition that it is felt particularly in the small centres.

If you are interested to prepare the Easter cheese pie or only to know how to do it, we propose you this traditional recipe:

Preparation:
Obtain the leavened bread pasta. In Italy you can find it in the bakeries but you can also prepare it by yourself, mixing some flour, a pinch of salt and the beer yeast (diluted in lukewarm water). Let the mixture leaven for several hours.

To prepare the pie pour the flour on the pastry board. Add the leavened bread pasta (softened in room temperature water). Mix them, adding also 10 gr. of beer yeast (melted down in a glass of lukewarm water). Mixing you should create a soft mixture. Do not use the whole flour, but leave some of it around the mixture on the board. Cover the surface with a flour veil and put a canvas over it. Let the mixture leaven until it has doubled its volume.

In a pot beat the whole eggs together with two yolks, add grated parmesan cheese, butter, lard, salt, pepper and nutmeg (as much as you prefer). Put the pot on the fire, slightly heat the mixture, but it must not become warm. Combine this mixture to the dough, that must be well raised.

Mix well the ingredients, adding the flour that you have left on the pastry board and 10g of remained beer yeast (loosened in lukewarm water). Then add the pieces of pecorino-cheese.

To bake the pie use a tall oven mould. Do not fill it more than half. Let the mixture rest and to leaven for few hours. Bake the cake in the oven at 180° C, around 1 hour.